The Gorilla, the Whale, the Parrot and the Baby Mac too 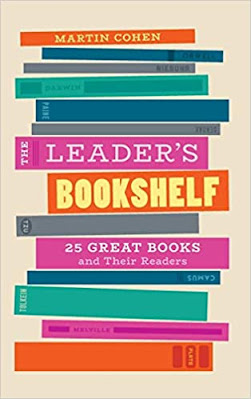 The Gorilla, the Whale, the Parrot and the Baby Mac too

Books as sources of ideas and inspiration
There's plenty of leadership gurus offering this or that book as essential reading for would-be entrepreneurs and CEOs. But the actual reading habits of successful people point a very different way.

My recent book, ‘The Leader's Bookshelf: 25 Great Books and their Readers’ ( at R&L books or if you prefer you-know-where, at Amazon.com ) - now out in paperback too! -  is really a series of 25 case studies, each one involving textual analysis of the biographies and historical place of the individual in question, along with analysis of the texts the individuals specifically cite as key influences. Perhaps the most intriguing part of all this is new links between the texts and the lives and thinking habits of the individuals: how often the one contains the seeds of the other. However, it’s not just a book about people and their life stories, rather it is a book about ideas and inspirations.
Naturally, there's lots of women in it as well. One of my favorite stories is that of Jane Goodall, the anthropologist. She made her name studying the way animals communicateÂ - but as a teenager she was inspired by a very modest text: Doctor Dolittle. In this, the parrot, Polynesia, explains to the good doctor that "animals don't always speak with thier mouths. They talk with their ears, with their feet, with their tales, with everything." Later the parrot points at the dog, who is wrinkling his nose, and explains that this means "Has it stopped raining?" adding that dogs always use their noses to ask questions.

* The magic and power of classic and not-so-classic - texts

For those of you who prefer to explore things as little videos instead of words, Micelo and I have made one that really does sum up the idea behind the book and it's here at Youtube:
Publishers Weekly reviewed it pre-publication like this: "Cohen’s explanations of influential books are enjoyable and upbeat"!

Actually, the review IS a little bit critical ("talking sniffily of the "meandering profiles") but still¦
The TES or Times Educational Supplement ran a wonderful feature (£) beautifully illustrated by David Parkins entitled “Works of genius: how books inspire our great thinkers”. And The Bookseller also ran a piece for their career-minded readers entitled “How can books inspire career success?”
Here's a bit from that to whet the appetite!
“Take for example British billionaire and entrepreneur, Richard Branson. His motto seems to be 'try everything and see if it works', and if that sounds a risky business strategy, that's because it is. So it is revealing to find that when asked about his favourite reads, Branson mentions a cult 1971 classic called Dice Man by Luke Rhinehart — actually a pseudonym for George Powers Cockcroft, a reclusive figure who says that he admires Zen philosophies.”
Anyway, for the book, I looked in detail at the reading lists of 25 highly successful individuals, some contemporary, some historical, ranging from people who changed *the way we think*, like Rachel Carson and Ludwig Wittgenstein to business titans like John D. Rockefeller and Warren Buffet whose success can be measured in more conventional ways. What I found was that reading is a vital leadership tool, but the power of books lies in their range - not only is there no shortlist of books for leaders, but on the contrary, reading has to be an active process, right from the moment of making a very personal selection. Ironically, recommending books on this or that, is often channelling people's thinking along old and exhausted paths.
Perhaps the key takeaway from the book is that the value of reading really lies in its unique ability to be an intuition pump, feeding the imagination. There's nothing else quite like it…