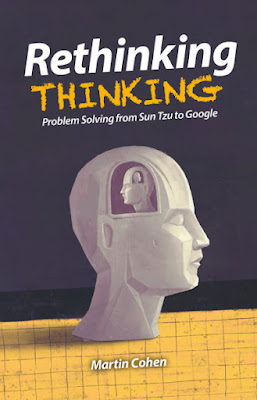 I’ve been thinking  lot about thinking a lot! This book is pretty much a summary of my thoughts over thirty years…

Tip One, via Sun Tzu’s classic text, The Art of War, is don’t do things the clever way, nor even  the smart way: do them the easy way. Because it doesn’t matter what you’re wondering about, or researching or doing - someone else has probably solved the problem for you already. Google it, get the book, find the answer.

Tip Two is to avoid ‘black and white’ thinking, binary distinctions, ‘yes/no’ language and questions, and instead take the tip from ‘design thinking’ that approaches rooted in notions of questions and answers are themselves limiting insight and that it is sometimes better to go for narratives.

Tip Three, which, yes, is connected to the previous tips, and that’s a good thing too,  is to look for the pattern in the data. However, there’s a caution that has to come with advice to  pattern match, because as we become attentive to some characteristics, we start to latch onto confirmatory evidence, and may neglect - maybe indeed suppress - other information that doesn’t fit our preconceptions.

Tip Four is ‘pump up the intuition’. Instead of thinking about ‘what is’, think about what might be. The ability to create imaginary worlds in our heads is perhaps our most extraordinary mental tool –yet so often neglected.

Tip Five actually looks more of a caution than a counsel: put all your cozy assumptions to one side and instead be ready to rigorously test and challenge every aspect of them. This is part of the solution to the age-old problem of 'thinking you know’, when, in fact, you don’t.

Tip Six, my favourite tip, is to doodle! Doodles, it turns out, are another kind of ‘intuition pumps’ (like thought experiments) and that gives you the clue as to what is valuable about doodling: the value of doodling lies in the freedom it gives your subconscious mind. Doodling, we might say, is in praise of the importance of small thoughts.

Tip Seven is about making sense of complexity - the kind of complexity that is all around us at every level. Here, the thinking tools you need are an eye for detail along with an ability to see broader relationships. Stop trying to work out, and maybe even control a complex system from above, instead, let the complexity organise itself - and you just concentrate on spotting the tell-tale signs of order.  Put another way, if the cat wants food, it will keep pestering you. Be aware of the patterns in the data!

Tip Eight, is the computer programmer's cautionary motto: ‘Garbage In, Garbage Out’. In everything we do, be aware of the quality of the information you are acting on. It could be compared to decorating a room: before you apply the colorful paints, before you lay the expensive carpet, have you prepared the surfaces? Mended the floorboards? Because shortcuts in preparation carry disastrous costs down the line. It's the same thing with arguments and reasoning. That dodgy assumption you made in haste, or perhaps because checking seemed time-consuming (or just boring) to do – can easily undermine your entire strategy, causing it to fall apart like at the first brush with reality.

Tip Nine, my last one here and the one ever so slightly paradoxically closing my book, is to use ‘emergent thinking’, by which I mean adopting strategies in life that involve exploring all the possibilities and then generating new ideas, concepts and solutions from out of combinations of those ideas which likely could not be found in them individually. Yes, the strategy sounds terribly simple, but that first stage - of exploring possibilities - can be terribly time consuming and literally, impractical. So there are a host of micro-strategies needed too, like learning how to find information quickly, and above all how to select just the useful stuff. Even sorting the garbage requires a little bit of skill along with the apparently trivial, routine procedures. Thinking requires a brain - whatever some researchers on mushrooms may tell you!

*Martin Cohen’s book Rethinking Thinking: Problem Solving from Sun Tzu to Google was published by Imprint Academic in mid-2022. This is what reviewer Geoff Ward said of it:

Rethinking Thinking provides nourishing food for thought… in a culture beset by a thinking ‘famine’… reverence for the supposed scientific consensus is particularly dangerous, as tolerating ambivalence and ‘not knowing’ plays a key role in maintaining openness to new information.