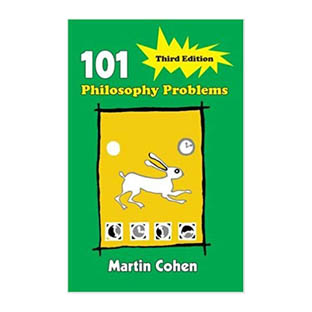 When it first came out way back in the last century (sighs) 101 Philosophy Problems was quite an iconoclast. Up to then, the most radical book of philosophy was Bertrand’s Problems of Philosophy, and that book splits the problems into boring categories like logic and epistemology...

So I knew, as a young(ish) philosophy teacher, there was room for a new look at the subject, and 101 PP was it. In time it went on to  sell (I think) about 250 000 copies in about 20 languages. I don’t know for sure as the publisher, Routledge, seemed to think it was a bit vulgar to keep track of things such as sales figures, although they gave me a nice lunch in London!

Here's a taste of the book, a problem that up to then had been summed up as a  landmark philosophical problem concerning our understanding of descriptive knowledge situated somewhere the field of epistemology... but I reinvented as simply the Problem of the Cow in the Field:

Farmer Field is concerned about his prize cow, Daisy. In fact, he is so concerned that when his dairyman tells him that Daisy is in the ﬁeld happily grazing, he says he needs to know for certain. He doesn’t want just to have a 99 per cent idea that Daisy is safe, he wants to be able to say that he knows Daisy is okay. Farmer Field goes out to the ﬁeld and, standing by the gate, sees in the distance, behind some trees, a white-and-black shape that he recognises as his favourite cow. He goes back to the dairy and tells his friend that he knows Daisy is in the ﬁeld.

Okay, so what’s the ‘problem’? Simply whether, at this point, does Farmer Field really does ‘know’ it.

And, as the story explains, the dairyman says he will check, and goes to the ﬁeld. There he ﬁnds Daisy, having a nap in a hollow, behind a bush, well out of sight of the gate. He also spots a large piece of black-and-white paper that has got caught in a tree.

That's it! See how simple it all seems. And indeed, that is the point of the book, to introduce BIG IDEAS in the simplest, most straightforward - and entertaining way.

The discussion of the problem is also very short, and just explains how in this example, Farmer Field  has satisfied the conventional requirements for ‘knowledge', he believes something, he has a relevant reason for his belief, and in fact his belief is correct... and yet we would not want to say that he really did know what he thought he knew. In this case, that his cow was in the field...

The book was warmly reviewed and helped encourage a new approach to writing (certainly in the UK context) philosophy introductions.

101 Philosophy Problems was quickly reviewed by Julian Baggini in The Philosophers Magazine (Summer 1999); by my then local paper, the Ilkley Gazette (May 29, 1999 ); and later on in the UK national press in the form of The Guardian (5.11.1999) and internationally including in Der Spiegel (2001) yet its success really seems to have be more attributable to what publishers refer to as ‘word of mouth’. Today, a Google search finds many hundreds of websites referring to the book, or its ‘sister’ book, 101 Ethical Dilemmas, and I still get emails following up, in good philosophical spirit, some of the ideas and issues raised in the book.


Without technical terms or incomprehensible superstructure, but instead with wit and irony, Martin Cohen explains the basic concepts of philosophy and incidentally introduces the most famous thinkers in history.        – Der Spiegel