I very much enjoyed Lorenza and Jascha latest Florianfilm entitled ‘The Wikipedia Promise’ (2021). This is a kind of drama documentary, the drama consisting in seeing how Wikipedia morphs between being ‘the fount of all knowledge’ in Jimmy Wales immortal phrase – and something really rather sinister. 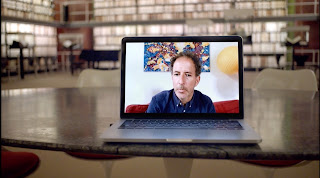 I was delighted to be one of the sources interviewed for the film, and to have one of my concerns about Wikipedia, that is it a kind of 'fast information' raising the same issues as ‘fast food’, notably being indigestible and made of dog ingredient. beautifully reconstructed into a visual!

The film does not take sides, but rather points at issues and suggests we should take Wikipedia seriously – but cautiously. Or to use the fast food analogy, we should avoid consuming too much of it.
I'll post a link to the film when I have a public one.
Philosophy has its adherents but let’s be frank, it makes for pretty poor visuals. Not so with food debates! And indeed, my book on food politics, I Think Therefore I Eat, led to interest from podcasters, radio and TRT whose Roundtable series is a discussion program with an edge. Broadcast out of London and presented by the canny David Foster, it says it is about bringing people to the table, listening to every opinion, and analysing every point of view, while ranging from ‘fierce debate’ to ‘reflective thinking’.

What I liked about the show, was the way David had essentially created a narrative for the debate beforehand, into which our contributions fitted. This made the exchanges much more coherent while still leaving room for spontaneity. Indeed, if I struggled in the atypical role of defender of farming here, (after for many years having advocated Pythagorean ideals of nature's bounty) the preparation stage allowed me to feed in several of my favorite food themes, notably:

Anyway, enough preamble, please check out the show! And apologies in advance for my swivelling!


And here is the video Turner and I prepared for I Think Therefore I Eat, with help from the anti-sugar folks!

This is also one of my favorite books, with another wonderful cover by Zolumio (also artist for 101 Philosophy Problems edition 3 and 101 Ethical Dilemmas Edition 2) , and although it didn't have quite the impact of the 101s, it does nonetheless have a very enthusiastic and dare I say, select following across numerous international editions. Indeed, it was translated into French (the French are very picky about ‘their’ philosophy books) and featured on their much-admired station, France Culture. (French speakers can enjoy the show  here . ) The point about Mind Games , and hey, does the title give a clue or does it just sound like the Joh Lennon song? is that it is about how the mind works, and this is a very interesting area and particularly so when approached non-technically and with a philosophical spirit of openness to ‘possibilities’. This is thus, philosophy but with a very different set of experts along with some of the usual philosophical names. There's Fre
Post a Comment
Read more

When it first came out way back in the last century (sighs) 101 Philosophy Problems was quite an iconoclast. Up to then, the most radical book of philosophy was Bertrand’s Problems of Philosophy , and that book splits the problems into boring categories like logic and epistemology ... So I knew, as a young(ish) philosophy teacher, there was room for a new look at the subject, and 101 PP was it. In time it went on to  sell (I think) about 250 000 copies in about 20 languages. I don’t know for sure as the publisher, Routledge, seemed to think it was a bit vulgar to keep track of things such as sales figures, although they gave me a nice lunch in London! Here's a taste of the book, a problem that up to then had been summed up as a  landmark philosophical problem concerning our understanding of descriptive knowledge situated somewhere the field of epistemology ... but I reinvented as simply the Problem of the Cow in the Field: Farmer Field is concerned about his prize co
Read more

Readers who know my strong slant towards FRUIT AND VEG in I Think Therefore I Eat, will maybe be puzzled to find me taking on the vegans recently. Nonetheless, that is where I felt the truth of the extraordinarily complex food arguments lies and philosophy takes us where the truth is whether we like it or not! The Observer (London) even accused me of waging ‘culture wars’ and wondered: Is it possible that a combination of well-meaning philanthropists and large agricultural concerns have united to exploit health fears for financial gain, while neglecting the nutritional shortcomings in their recommendations? Anyway, in the event I was delighted to work with the brilliant Frédéric Leroy on this article, which basically follows up a request he received from the influential European Food Agency to raise public awareness about the complexity of food issues and the implicatons of simple ‘one size fits all’ solutions. Our piece kicked off a public information campaign which i
Read more