Seeing the world another way 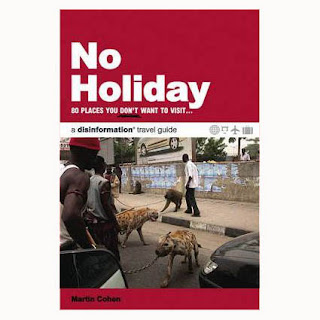 No Holiday is my book that came nearest to being made into a film! At least, I had a very nice dinner (with my researcher, Paula C.) on the idea of it - and a small options deal. Alas, the film (it would have been for TV, a documentary) never happened. But I can still see this book as having all the ingredients of a great series. Why? Because, in the spirit of all travel writing, it is about strange places and extraodrianry sights.

As the publisher put it:

‘In this first Disinformation Travel Guide, Martin Cohen visits exotic locations (80 of them!) but with a different aim than the usual travel book: to seek out the suffering and injustices, not to skirt them. We will see the dark red waters of ‘Murdering Creek’ in Australia, silent testament to the ongoing genocide of the world’s oldest people... we will visit the olive groves of Palestine where the helicopter gunships of the Israeli Army patter by like so many gigantic marauding insects, and we will queue up to see not museums and art galleries, but the more sinister monuments of politics, like the academy of terror funded by the CIA at Fort Benning in Georgia, or the poisoned shores of the Aral Sea revealing an abandoned biological warfare center...


We will visit not the great ‘sights’ but the great ‘sores’, the forever cursed cites of Hiroshima and Nagasaki, where so many died, as Churchill might have said, for so little. We’ll enter the no-man's lands of the demilitarized zones of past conflicts - between North and South Korea, between Syria and Israel, even between Catholic and Protestants in Northern Ireland.’

Stores immediately put the book in the travel section and - guess what - it sold like a bucket and spade at a croquet match. Because what the book really is, of course, is  social science and a sideways look at politics and the environment.

So it’s fair to say a lot of people didn’t ‘get it’, but at least some people did. I was delighted by a feature in London’s much-read TNT Magazine by Amy Adams. She liked the way that the idea of Africa as home to famine or safari, depending on whether you’re watching the news or a holiday show, is undermined by recommended trips to a shoe factor or a redundant fish freezing plant.

‘Cohen scribbles over the problems of the world with a big fat flourescent marker’ she says, and the only silver lining to this ‘globe-spanning cloud’ is that the worse a situation gets, the more likely it is to become a tourist attraction. All this, under the heading EXTREME travel, and accompanied by well-chosen images of the infamous Ferris Wheel at Chernobyl, the railway tracks at Auschwitz and US soldier standing with rifle in an otherwise ordinary looking street in Baghdad.

Amy interviewed me and she tells the story well, including how the book ‘attempts to reverse the dominant myths attached to places’.

In 2019, the Spanish daily El Mundo ran a feature on what it called ‘Dark Tourism. Here are some extracts...

From TV to the grave: how series like Chernobyl or Narcos have multiplied interest in macabre tourism

The economic exploitation of places associated with the catastrophe or crime scenarios has skyrocketed thanks to the issuance of several recent blockbusters. "We've all seen too many pictures of beautiful beaches," says the author of ‘No Holiday’.

We've all seen too many pictures of beaches; only what causes fear continues to disturb...

... In 2006, with airlines and tour operators around the world still recovering from 9/11, British philosopher Martin Cohen published No Holiday. 80 Places You Don't Want To Visit. It was the first rigorous approach to black tourism, despite the fact that Cohen raises his essay in an allegedly informal tone as a disinformative travel guide . "I spent several years in Brisbane and had plenty of time to wonder if there was a hidden Australia," recalls the author. "Well, just a few miles away was Murdering Creek , which refers to an episode forgotten in the local history in which many Aboriginal people died. It is a beautiful place, but not particularly unique. What made being there was fascinating is the light shed on Australia and its people today. "

With its 80 anti-recommendations , Cohen transforms the world map into a nightmare atlas that has a lot of inner travel, fromstendhalazo to a cemetery in the background. "Yes, although there is a strong environmental thread, the human condition is at the heart of the book. What appears again and again is how much evil there is in the heart of man, " he admits.Tipping, it offers one more clue about the rise of black tourism: the appetite for extreme sensations. "Chernobyl has gone from being a minority destination to appearing in the Sunday newspaper supplements. I guess people start to assume that the risk has disappeared. And yet, the idea of ​​danger is at the heart of black tourism, even if it is a historical or second-hand danger. We have all seen too many pictures of beautiful beaches; only what causes fear continues to attract . "

Eduardo Prieto, Professor of Architecture at the Polytechnic University of Madrid, agrees. And he also argues that the physical journey to a devastated enclave is usually the result of a created need that has previously made this enclave into a kind of myth or desirable appetite. "The phenomenon is similar to that of conventional tourism: if tourists flock to photograph La Gioconda it is because the cultural industry, before, has inoculated in their brains the idea that this painting is an almost religious icon. The photo of La Gioconda, in this sense, it does nothing but record the 'I was here', beyond the aesthetic experience that the contemplation of the painting may have produced, if this happens with an object as boring for the average viewer as … La Gioconda, what will not happen with the dangerous and little crowded enclaves of tragedies and catastrophes, in which the 'I was here' has something of 'I was here but I can tell it?' "

Prieto also recalls the  Londoners who, according to the chronicles, went out to admire the flames in the great fire of their city in 1655, and even the Berliners who found a fireworks show in the bombings of World War II.

“Catastrophe, tragedy, death are always susceptible of aesthetizing, as long as we contemplate them from a distance... ” 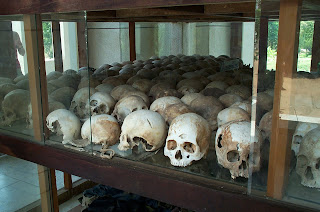