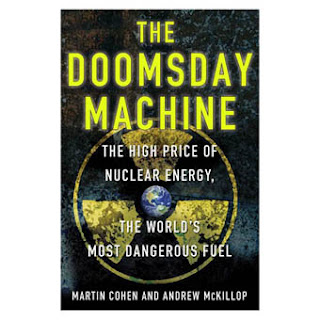 2012 was the year my book on nuclear power, or to be precise energy economics, came out. Put that way, it sounds technical, and quite different from philosophy ‘as it is normally known’ - but I think the book fits quite well within that broad sweep of social science which has philosophy at its heart.

Anyway, here is a book that looks a hot issues in energy politics, quite a lot at economics, a bit at climate science, and definitely includes plenty of bad arguments. Not mine! All those rotten arguments produced by the nuclear lobby, and their many supporters. We call them the seven nuclear myths.

The book followed the infamous Fukushima disaster, coming out just one year later, and naive readers might imagine I was 'inspired' (if that's the right word) to write it by the events in Japan. But not at all, books like this take years of research and I had started working on the project long before. In addition, I worked closely with my co-author, the brilliant but enigmatic Andrew McKillop who spent his whole life in energy politics and patiently explained to me many of the intricacies. I was also much helped, particularly in the economics aspects, by Steve Thomas, a professor at Greenwich University in the UK.

The book, it is fair to say, had a mixed reception. Matthew Wald in the New York Times called it:


‘A polemic on the evils of splitting the atom’

and so it is, but I maintain it is in the dictionary sense of ‘a strong verbal or written attack on someone or something’ not as in the disgraceful popular usage of ‘contentious rhetoric that is intended to support a specific position by aggressive claims’.

Mind you, Fred Pearce, was polemical in this sense, in his review of the book for the New Scientist. But Fred, you see, is a long standing advocate of nuclear power and could not bear to see its pretensions being challenged.

The review I appreciated most, and I really think gives the truest picture came from long time Guardian environment correspondent, Paul Brown, writing for the Climate News Network, who says

‘This well-written book is a comprehensive attack on an industry that, despite the Chernobyl and Fukushima accidents and an extraordinary history of cost overruns and delays, still has many supporters and continues to plan for worldwide expansion.
The authors set about debunking what they call the eight myths of nuclear power. This is the basis for eight chapters attacking the claims that nuclear power is green, clean and safe, and that radiation is harmless.
Perhaps the most telling argument is that nuclear energy is just too expensive to be a rational choice for electricity production. Cohen and McKillop argue that no other industry gets the extraordinary level of subsidy given by governments to atomic power.
All governments guarantee free insurance against catastrophic accidents and all provide a taxpayer-funded or heavily subsidised disposal service for nuclear waste – although the authors point out that most countries simply store their most dangerous radioactive garbage, since they have no safe way of disposing of it.
The book says new nuclear stations are so costly to construct that they cannot compete with conventional fuels. They cite as examples the current problems of new Finnish and French reactors already years behind schedule and already at double their original costs, without having yet produced any power at all.
There are still 400 nuclear reactors in operation worldwide, but few under construction, mainly because of these heavy initial costs. But the industry has been looking for a revival of its fortunes because of the threat of climate change.’

You can read the full review here.

But perhaps the nicest review, and what a surprise! came from Graham Nash, a two-time Rock and Roll Hall of Fame inductee - with Crosby, Stills, and Nash and with The Hollies.


‘How refreshing to read such a well-reasoned and thoughtful perspective on the real costs of nuclear power. The only way to become informed is to be read books like The Doomsday Machine. Martin Cohen and Andrew McKillop's newest book contains so much important information that it completely rips the curtain aside for us all to see, at last, the real cost of nuclear power. Truly a must read.’
―Graham Nash, of Crosby, Stills, Nash & Young

The book went into translation in several countries including Spain and Turkey, and was produced as an audiobook, but alas did not slow down the nuclear bandwagon, with several of its dire predictions about 'new nuclear' to watch (notably in Turkey) coming true.

I made a little video to accompany the book which gives a flavor of the ‘horror’ of nuclear if not so much of the complex economics and politics. The publisher made two chapters available as “tasters” - here‘s the one on the myth that nuclear power is green.