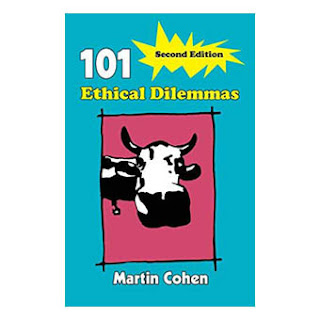 Mind you, calling ethics ‘agonizing’ maybe puts the thing on the wrong footing. Because this book, the follow-up to 101 Philosophy Problems, is great fun. It surprised my very shrewd Routledge editor, Tony, who hesitated over the idea saying that hardly any one read ethics and we didn’t want to tie 101 Philosophy Problems to a lead balloon.

But as anyone who has read both books will know, there’s plenty of overlap between a philosophy problem and an ethical dilemma. The thinking is the same and if presented as riddles, they can appeal to the same audience.

Actually, despite Tony's initial doubts, 101 Ethical Dilemmas went on to be one of my most successful titles, selling I think about 150 000 copies and going again into about 15 foreign editions. That may not sound a lot to writers of pop fiction but for a serious academic study of ethics, it, well, changed the rules of the game.

Again, for people interested in such things, I didn't really get much money for the book, but I did enjoy writing it, and I was even a keynote speaker at a state-run, meaning Communist Party run, Conference on the Environment: Yunnan Province, China. My topic was: How Indigenous Rights and Ecological Duties go Hand-in-Hand.

The paper I gave, and no I wasn't put up to do this, I could have done anything I wanted, looked at the way the European settlers in Australia had systematically exterminated both the indigenous people of the land and the animal populations. (Later on, I'd also write about specific cases of genocide in my ‘black armband’ alternative travel guidebook No Holiday.) However, 101 Ethical Dilemmas particularly looked at the question of species and extinction - what value does a species have? Why do we put so little resources into saving them? But I also noted in the book the link to human society.. narrow social interests often trump wider ecological values.

Anyway, it was a great conference (big shout out to Professor Lisa Wang for organising my trip! And much else besides... ) and I will always remember the warm and open way the Chinese received these controversial ideas. By contrast, when I gave a similar paper in Australia at a conference at Queensland University of Technology a former member of the Queensland government stood up and insisted that I be prevented from continuing, and (get this) the chair of the meeting agreed with him! He said to me, the person about five minutes into a half hour presentation, ‘you’ve had your say, now let’s hear some views from the audience’. So there was no room for this debate in Australia and yet there was in communist China. It all goes to underline a key ethical principle, don't believe what's written on the tin, check out the contents of the tin itself.


So, ethics, as I approached it, is a series of perplexing riddles and challenging debates, not at all the way it is taught in universities and schools as 'platitudes' and logical rules. 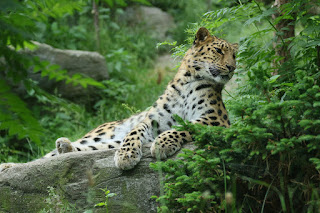 * This was a more hopeful, open China. A sad contrast with recent policy which has led to the terrible events going on in Xinjiang today... but as Ian Keith recently argued, China remains crucial to preserving global biodiversity.