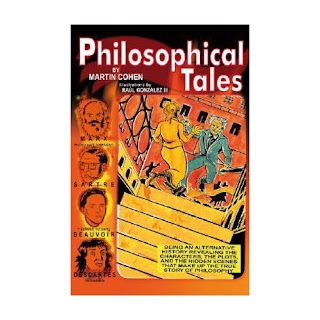 Philosophical Tales has always been one of my favorite books. As the strapline says, it is an ‘alternative history’ of philosophy, and philosophy so much needs some of its conventions challenging. Not least that the subject is somehow a kind of crude effort to put arguments in logical form, or dissect words via linguistic analysis. No, philosophy is a very odd creature, peopled by some very colorful characters. Take Socrates, for example, the star of the most influential philosophy book of them all, Plato's Republic. My chapter on him, called ‘Socrates the Sorcerer’ reveals a very different kind of fellow to the boring analytic philosopher of the colleges. Here is a kind of mystic, an enigmatic figure who probably travelled to Egypt to imbibe the wisdom of both Africa and the East, and significantly claims to have been inspired by one of philosophy’s hidden women – a priestess probably at the Oracle.

Plato, the idealist, offers an idol, a master figure, for philosophy. A Saint, a prophet of ‘the Sun-God’, a teacher condemned for his teachings as a heretic.

My editor for this project, the warm and intelligent Jeff Dean, of the now much-diminished Blackwell publisher, allowed me great freedom in writing this book, and also supported the idea of original illustrations. In the event, these were provided by Raul Gonzalez, a talented illustrator who employed a range of styles. One of my favorite images, though is that of Leibniz gazing intently at his ‘calculating machine’, or early computer. Leibniz, who lived in the eighteenth century, you see, was a real polymath, always inventing things. Unfortunately for him, microprocessors not yet exist, nor even transistors, nor even valves - and so his machine relied on cogwheels and well, was completely useless. However he was proud of his work and even designed a special medal proclaiming his achievement. Typical of Leibniz, though, the medal was never struck: the conceit was enough.


PS. There’s a little video saying more about the book at Goodreads here...