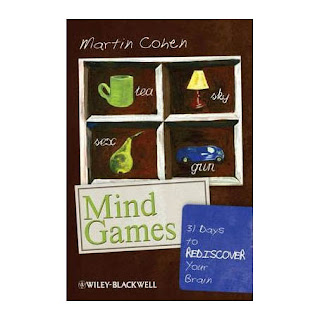 This is also one of my favorite books, with another wonderful cover by Zolumio (also artist for 101 Philosophy Problems edition 3 and 101 Ethical Dilemmas Edition 2) , and although it didn't have quite the impact of the 101s, it does nonetheless have a very enthusiastic and dare I say, select following across numerous international editions. Indeed, it was translated into French (the French are very picky about ‘their’ philosophy books) and featured on their much-admired station, France Culture. (French speakers can enjoy the show here. )

The point about Mind Games, and hey, does the title give a clue or does it just sound like the Joh Lennon song? is that it is about how the mind works, and this is a very interesting area and particularly so when approached non-technically and with a philosophical spirit of openness to ‘possibilities’.

This is thus, philosophy but with a very different set of experts along with some of the usual philosophical names. There's Freud and Jean Piaget, but also Descartes and Daniel Dennett. There's Jung and Seymour Papert and William Molyneux alongside Locke and Loehr. Who he? But Franklin Loehr. This is the investigator who conducted experiments with plants to see if prayer could make them grow better. Did they? ‘Get the book’ as GoogleBooks likes to say... No, I'll let you have this one:


One experiment involved planting 46 corn kernels in a large seed tray, half on one side, half on the other. The corn kernels on the left side were then prayed over for every day for a week. At the end of that time, as the experimenter reported ‘sixteen sturdy little seedlings greeted us on the positive side’. On the negative side? ‘There was but one.’
And that no doubt was probably on the boundary, but this important detail is not recorded.